Anna is 16 years old diagnosed with anorexia nervosa. She has been attending the day program for two months and currently has a BMI of 17.8. She went to a few of her classes at school during spring, and now that is summer vacation she has chosen to do some work experience at a pet store. 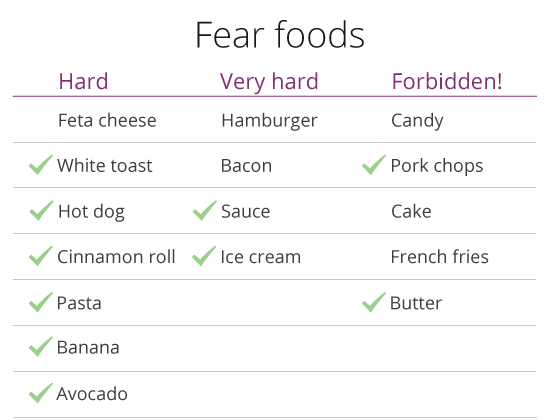 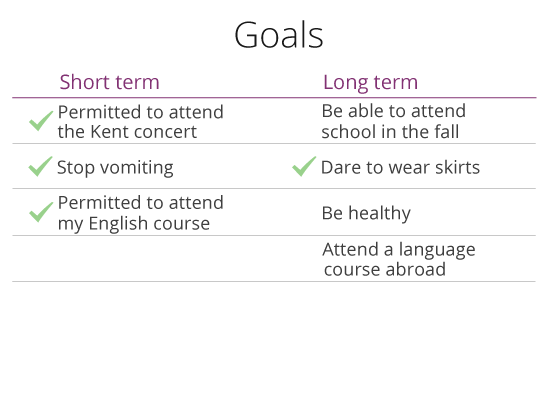 There are many foods that Anna is afraid to eat. She has written a list of all her fear foods, and with the help the treatment she has been receiving at the Mandometer clinic she is steadily checking off foods from her list.

Anna has also written down her goals and objectives. She has met several of these too. 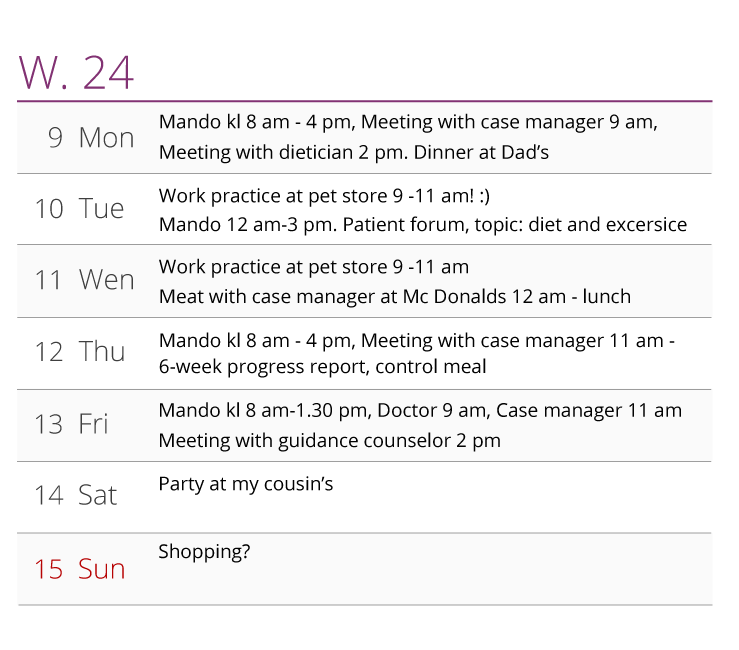 Anna experiencs difficulties to be on time for appointments. Therefore the case manager and Anna write a schedule or a “to do list” hour by hour. Below is Anna’s schedule for Monday. 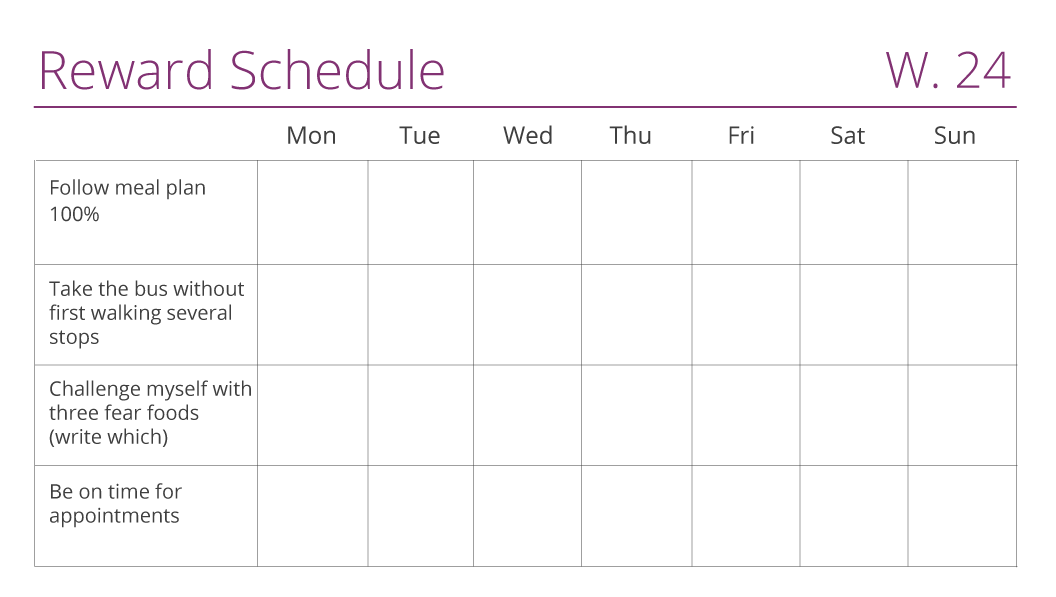 Part of the weekly planning includes setting new goals for the week. Anna and her case manager agree that she must continue to follow her meal plan, that she must keep her physical activity low and that Anna will eat some of the fear foods that are on her list. Anna’s case manager suggests she eats a hamburger out at a restaurant. Anna is not comfortable with this and says that it’s too hard to eat a hamburger and fries on the same day, and that she should be allowed to eat something easier. Anna’s case manager explains that it is often better to aim high, and goes on to remind Anna of some successful examples from previous challenges where Anna has succeeded. Anna agrees to try. She and her case manager discuss possible rewards for Anna if she is able to meet this weeks objectives. Anna decides she want to go in to the city to do some shopping and buy a new pair of shoes on Sunday. 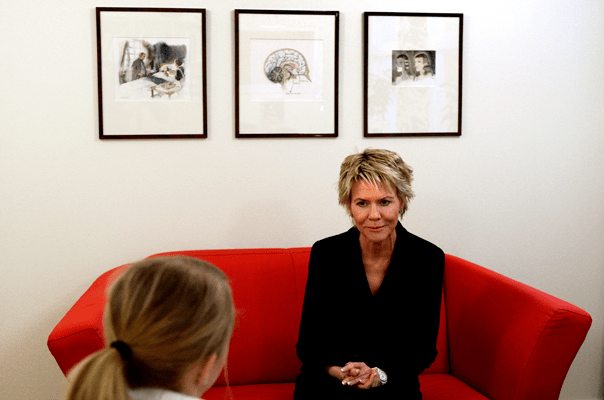 Anna and her case manager go to the pet store where Anna will be doing work practice a few hours a week during the summer.  The purpose of the meeting is to organise the hours Anna will be working and to give Anna some information about the animals.  Anna’s case manager and the store manager organise the necessary insurance documents.

Anna visits the clinic for lunch, then rests in one of the warm rooms.  Following this, she participates in one of the forums for patients that are held at the Mandometer clinic once a week.  Today’s topic, “Why is it so difficult to choose what to eat?” is run by the clinic’s dietician.

Anna meets with her case manager again in the afternoon.  She talks about some of the things she learned at the patient forum.  They put stickers in the boxes on Anna’s reward schedule for Monday’s challenges, and Anna is complemented for her good work.  Anna talks about that how she was feeling fat last night, and this raised lots of thoughts and questions.  They talk for a while about Anna’s concerns. 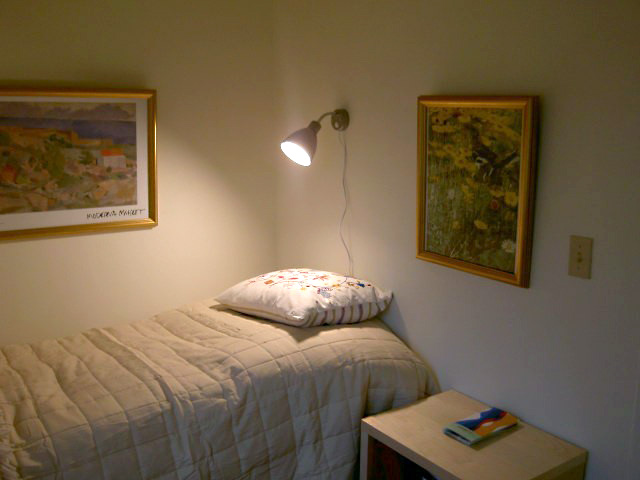 Anna is doing working practice at the pet store this morning.  She is to take responsibility for having her morning snack at 10am.

They enter the restaurant and Anna meets her challenge.  After eating, they sit in the sun and talk.  The heat from the sun has a calming effect for Anna.  They then return to the clinic for the afternoon snack.

Later in the afternoon Anna becomes very anxious about the lunch she ate at the restaurant. Anna’s case manager puts aside her administrative work, and takes the time necessary to talk with Anna until her anxiety subsides. Anna spends some more time in one of the warm rooms before she goes home. 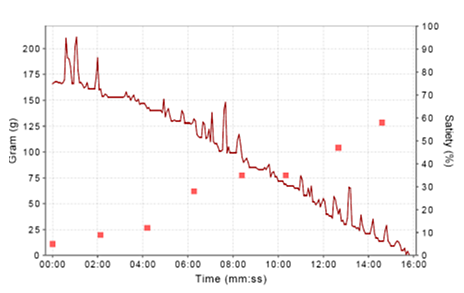 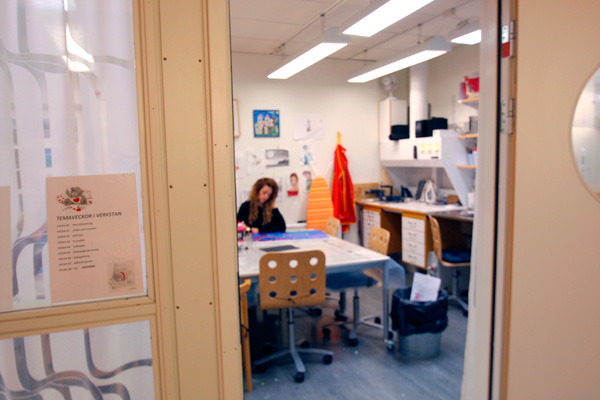 Anna receives some forms to fill out in the morning, and then goes through the results with her case manager.  The forms indicate that Anna’s level of anxiety, compulsive behaviour and depression have decreased since they were last measured six weeks ago.  Anna describes how she still gets anxious, but that it goes away faster, and that she is willing to sit with her anxiety until it passes.  Previously, Anna used unhealthy strategies to avoid feeling anxious such as, hiding food or vomiting after eating.  Anna now understands that these behaviours are only short term solutions.  Anna’s case manager brings up yesterday as an example of how Anna is now able to ask for help when she is feeling anxious.

At lunch, Anna uses her Mandometer® to eat a control meal.  Anna puts the amount of food that she wants to eat on her plate, and eats it at the pace she thinks is right.  She is regularly prompted to rate how full she feels over the course of her meal.  After eating Anna rests in a warm room.  Later in the day, Anna and her case manager look at the results of her control meal.

Anna says that she didn’t eat much food because she knows that the normal serving size that a healthy person eats is 350 grams.  Healthy individuals normally eat this amount of food in 12-15 minutes.

In the afternoon, Anna joins some of the other patients in the craft room, where patients can do activities, such as painting, sewing, embroidery, wood work and working with ceramics. 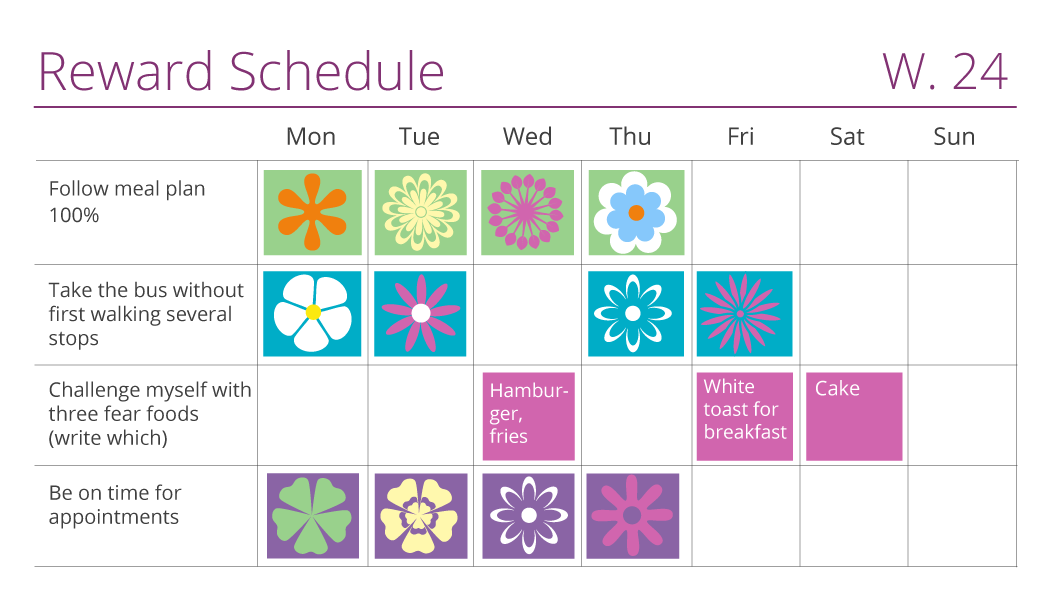 Anna and her case manager have an appointment with the clinic’s doctor at 9am. The purpose of the meeting is to discuss how Anna is feeling now that she has stopped taking the anti-depressant medication she was on when she commenced treatment at the Mandometer Clinic. Anna says that she is feeling well and she is not aware of any major issues. The doctor is pleased with Anna’s progress, and explains that following her treatment plan is what has helped reduce her depression and compulsive behaviour.

At 11am Anna and her case manager review Anna’s challenges for the week, and talk about other areas where Anna has made progress.  Anna’s reward schedule now looks as the picture shows:

Anna’s case manager asks her what happened on Wednesday, because one box is empty.  Anna says that her bus was late and she couldn’t sit still and wait for the next one, so she walked to the next station.  Anna and her case manager talk about it.  Anna suggests she will try cake on Saturday.  Anna’s case manager is impressed with her initiative and they agree that Anna will get her reward on Sunday.

At the end of each week Anna’s case manager phones Anna’s mother to tell her about how the week has gone and let her know about any upcoming events in the treatment plan. 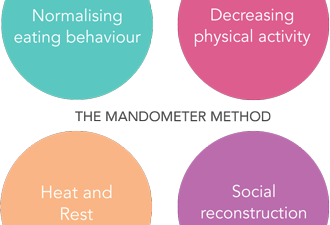 You learn to eat normally, rest in a heated environment, reduce your activity, and prepare to return to school or work

The four cornerstones of treatment 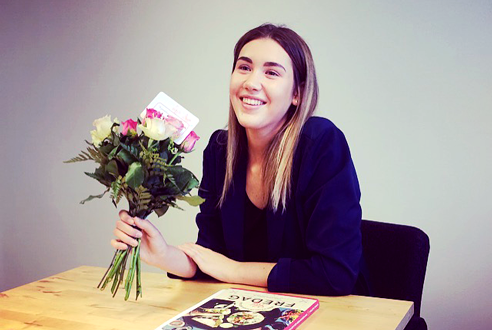 We follow our patients
for five years after remission

When you are healthy again

Mando Group AB
SHORTCUTS
Self referral
Copyright All Rights Reserved © 2022
Contact Us
We use cookies to improve the way our website works. By using this website, you agree to our use of cookies and also our Privacy Policy. We at the Mandometer Clinics take the necessary steps to ensure that personal data are handled in accordance with the requirements of the GDPR.OKRead more